There had been major renovation from the end of October to just before Xmas. This included replacing the sills, getting the back fence built, fixing the powder room and fixing the kitchen. There were periods where we worked every day for a couple of weeks straight, with no weekend breaks. It felt like renovation bootcamp. I often worked after John left for the day, like getting another coat of paint on, or continuing the plaster repairs, or whatever. The house was in complete chaos, with contents from the kitchen displaced outwards. I was using the laundry sink in the back porch to do dishes – the FREEZING, dim back porch. I had a trouble light hung upside down over the sink so I could even see the dishes properly.

I felt on the cusp of sanity. The repairs that were completed were a major improvement, but I was physically and emotionally exhausted.

This is the photo of the cabinets from the seller’s listing on Craigslist: 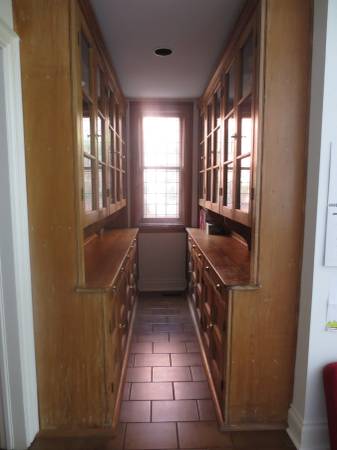 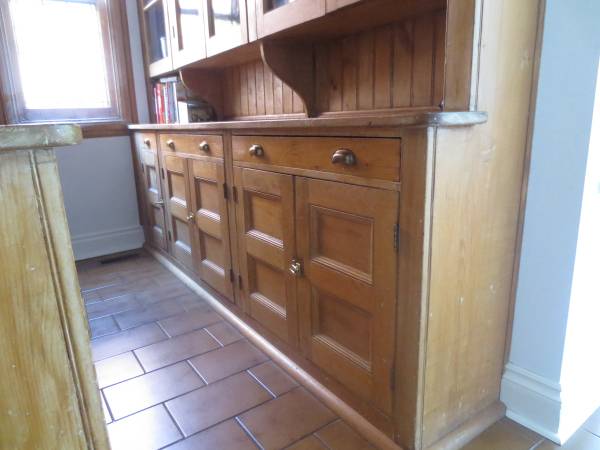 I just could not believe my good fortune that I a) saw the ad first and b) bought them both for $ 500.00. The seller even included custom tempered glass shelves.

Installing them properly had me fretting, though. The section that was going in the kitchen needed to have the single section at the far end removed, to make it fit on the wall. There was only one chance to do this correctly.

John has at least 60 years of carpentry experience, so I had faith in his skills and good judgement. However – there can be unknown variables that create havoc. I think we were both worried about many what-ifs.

It came together without any problems at all. John had to do some fussing to fit the tongue and groove boards around the electrical outlet, but that was the greatest difficulty. There are no words to express how relieved I was to see it up, at last:

Now one thing I knew from experience with antique cabinets like this, is that the height between the counter to the bottom of the cabinet is not high enough for a mixer or blender. I had some thoughts of raising the upper – but this would mean that the sides would need to get patched in. That seemed like a worse headache.

I had been looking for some kind of cabinet for a work surface, where the mixer and blender and other kitchen spare parts could be stored. There were a bunch of maybe’s, but then I spotted a PAIR, listed for $ 100.00 on Kijiji. The ad described that they needed new back boards. John said he could pick them up, so I called the seller. I asked if they were $ 100.00 each – or $ 100.00 for both. The seller just wanted them gone, so he sold them for $ 100.00 for both – $ 50.00 each ! The ad described how large they were – 36″ tall x 60″ long. I looked at a measuring tape – and one would fit where I needed it to go. They were bigger in person than what was in my mind, though. John could barely fit both of them in his truck, which has a canopy on the back. I have no idea how he accomplished this, but he did !

They were grimy, and the doors wouldn’t shut properly. John quickly saw this was because their shape had shifted slightly to one side. When they were pushed back into alignment the doors fit perfectly. One of the cabinets had been in a fire (!) which damaged one shelf. He replaced this, and cut new backs for them. The one for the kitchen was going to be mounted on casters. This was partly to create a toe-kick, partly to lift it off the floor as it would partially cover the floor heat vent.

I cleaned them, removed the original hardware and scrubbed the rust off, then gave that a good oiling. I tested a section and discovered that they had a shellac finish. This meant that I was able to lift the worst grime off and seal the scratches with a rag soaked in denatured alcohol. They cleaned up very well.

They may have been church or school furniture. One of them had “library” written in pencil on the side. They are really built, with doors that are 1″ thick. I sure couldn’t buy this at Ikea for $ 50.00.

On a stop at the ReStore I found a vintage handheld light, like for doing home movies with a Super8 camera. I realized that I could easily take the handle off, and the rest unscrewed, so it could be taken apart and rewired. This became the light over this cabinet.

I painted the floors with oil enamel in several sections. It was winter, so I was worried that if I painted the entire floor that it might not be dry enough overnight. It was my only kitchen and I needed to use it. I planned to paint a pattern on it, but the intense two months had really wiped me out. A year later there is still no pattern. Oh well.

At my former house was an old heavy shelf we never installed. I carted this through the Nightmare Apartment and finally had a place for it. One side of it showed what appeared to be the ghosts of support pillars. I think it was the top of an antique mantelpiece. The previous owner at the house had been a very frugal man, so I wouldn’t be surprised if he picked this up on garbage night – just like I would have ! It had a coat of ham colored latex paint that easily scratched off. I thought about repainting it – but the latex paint would need to all come off first. As I scrubbed away a nice vintage green color was revealed. I realized that if the shelf was flipped over – so the less good side was the shelf surface then I didn’t need to paint it at all ! I had searched for cast iron brackets that were the right size. Ebay had many – but they were all too small to support a shelf of this width. A Kijiji seller had a lot of cast iron items he was selling for crazy cheap, with four (new faux antique) brackets that were big enough. He wouldn’t split up the lot, though. I did want the brackets, and a few other items so I bought it all. I enticed him with a vintage cast iron frying pan he really wanted (Javelin, manufactured for a short period of time in Canada with a crazy history. Look it up !) so he even delivered. I didn’t  100% love them, but I loved them more than the nice reproductions from the UK that cost $100.00/pr, before shipping and duty.

A friend gave me a 1950 Moffat stove as a housewarming gift (when I moved to the Nightmare Apartment). I sent it away to Ed White Appliances in Port Hope, ON to be rebuilt. I had tried for months to find a competent repair person when I lived in Toronto, then before I moved to London, but couldn’t find anyone. The stove worked, but had a few issues. I was so happy when I finally got it back in Feb. The modern stove that came with the house was 30″ wide. My Moffat is barely 22″ wide. Reclaiming that 8″ in a difficult kitchen was another relief.

The Moffat has a glass dial for the oven that lights up when it is turned on, indicator lights, a timer, a warming oven and a broiler, with loads of chrome. What more could I want ? The oven is quite small – about 16″ wide. This is not an issue, as I don’t roast or bake giant things, anyway. I noticed that my electricity bill went down after I got my stove back – as it wasn’t using so much energy to heat a giant (for me) oven.

Without including labour, which cost a bundle, but worth every penny the final amount was:

This tallies up to $ 2011.00. The drywall is missing from the list because I can’t remember what I paid, as well as many other items like screws and what have you. As kitchen renovations go, this was dirt cheap.

I had bought a cute 1950’s fridge on Kijiji for $ 200.00 to replace the monster that came with the house, but it died after nine months. To replace the compressor would cost at least $ 800.00. I frowned and bought a new fridge from Best Buy on sale for about $500.00, just under 10 cu/ft. I was really sad to give up on my vintage fridge. I swore to myself that I would not buy another vintage one unless I could find a local repair person who was competent with vintage fridges. I did not.

The kitchen was done. Done ! 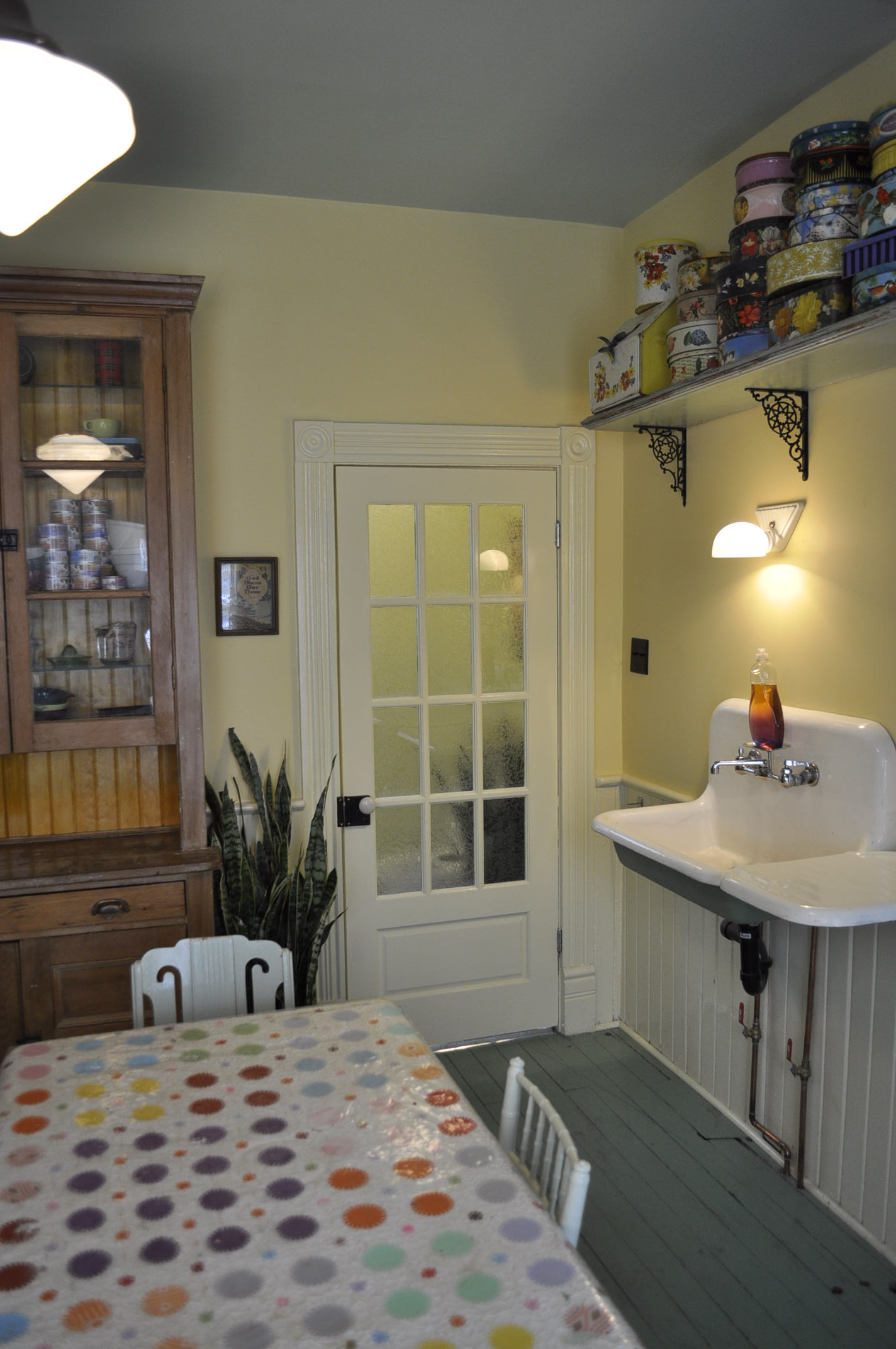