My plan was to move somewhere with a University and/or college, to continue my education. Hamilton, Peterborough, Kingston, London and Windsor all seemed possible. The houses at the bottom of those markets were affordable. I missed out on a place that seemed okay in Peterborough. Kingston was iffy for a number of reasons. Windsor was a little far away for a day trip to look at houses.

The kind of house I wanted was a geezer. This meant an older house, probably one that had belonged to the same person for a long time, with few updates. I grew up in a plain bungalow built in the late 50’s, which held little charm for me. Since I moved out of my parents home I lived in pre-1920’s buildings, on the verge of decrepitude. The house I owned with my ex was built in 1873. Its last owners bought it in 1952, and died two months apart in 2004. They had done little to it besides some groovy wallpaper and a dysfunctional powder room. A house like this was conceptually familiar.

I wasn’t afraid of run down houses that needed work, that suffered from deferred maintenance. I was really averse to flipper houses. I had seen many of the cheap cover-ups in my old neighbourhood, and loathed them. I wanted to avoid any proximity to student rentals, obvious hoarders, scary rooming houses, or areas that seemed to have a fussy or picky community. I needed to be close to public transit, and within walking distance to a grocery store.

I spotted a house in London that seemed perfect. This turned out to be a For Sale By Owner (FSBO), with another insane seller, so I never was able to view this house. My realtor drove me past it after some pestering – and right next door was an even better house that looked intact from when it was built in the late 1800’s (not for sale, alas). This was exactly what I was looking for. London seemed liveable, and the houses were mostly detached, and even really modest houses had yards, with trees.

We looked at some duds. My realtor scheduled a viewing for a home that looked really good – intact, with all the original woodwork and stained glass. The night before the viewing she got intensely ill with some 24 hour bug, so we had to cancel. This turned out to be fortuitous, as the house I ultimately bought was listed that night.

After she recovered, we made the trip to look at both houses, which were within a few blocks of each other. The first house was pretty amazing. It may have been a manse as it was next to a church. The house was in very good condition, had a front and back staircase, pocket doors, a giant high basement, and many other features. It was also HUGE for one person, with 5 bedrooms. There was a garage in poor condition, which worried me.

The other house seemed like a manageable size. It had more condition issues, but was also $ 30,000 less. All the doors and windows were original, and the room configuration and exterior had never been messed with. The location was sort of antisocial – between a used car lot, and the side and parking lot of a factory, on a tiny side street. This was especially appealing as I would never be dealing with neighbour’s drunken parties. The lot was very overgrown, but had been trimmed back when it was listed. There were many trees, and the back wall of the used car building made the yard quite private. There were houses across the street, and none looked troublesome.

The realtor and the seller had obviously worked very hard to make this listing as palatable as possible with creative staging and strategic photography. The plaster in most of the rooms was in rough condition, which the seller attempted to disguise with dramatic paint schemes. The house was a little beat up, but had all the things I was looking for, including stained glass windows in three rooms.

We went back for a second look the same day. All things considered, this seemed like the right house. The house inspection didn’t have any surprises. The issues were obvious. I ruminated for a couple of days then bought it.

Was this smart or stupid ? 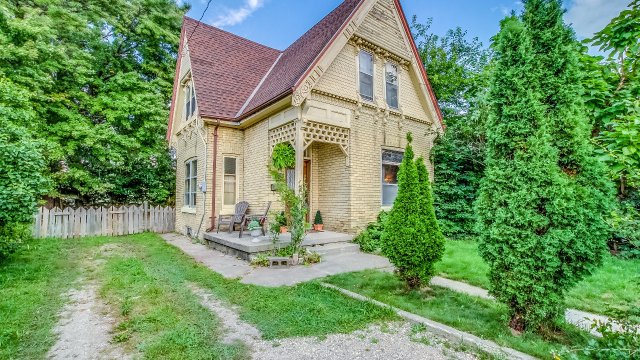 One thought on “Looking for a Home”