What heritage is worth preserving ? What obligation does a conscientious renovator have to create less waste, and use what still functions ?

There are a couple of books in the London Library system about the history of the Hamilton Road area. The books are photocopied compilations of a free newspaper from this area, that was around in the 70’s and 80’s. There are archival photos and clippings from the London Free Press. While they are a little homemade feeling, the information in them is great, with everything from wedding photos to ghost stories to photos of businesses long gone. There is even a photo of my house – with a caption that claimed this was the original Pegler/Peglar farmhouse (which makes zero sense as this house is the same age as others on the street, late 1800’s). There had been the oldest surviving London residence adjacent to my backyard. This was the White Ox Inn, which had started as a single family residence in 1819, was abandoned then expropriated by the city in the 1830’s to become a cholera hospital, then it became a stagecoach stop (The White Ox Inn), then a single family home again(1900ish), then a fish and chip shop that burned down in the early 1980’s. This was located at 495 Hamilton Road, which is part of Enerzone’s parking lot now:

A photo from the early 20th c. Look, there’s my house in the background ! 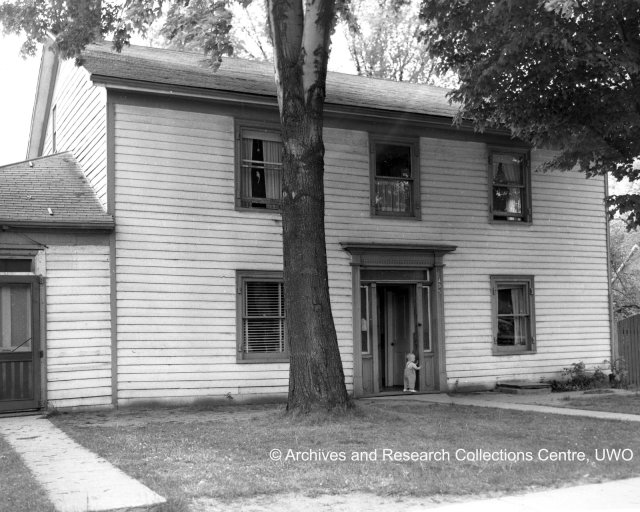 The Hamilton Road books did NOT have any photos of the gas station/used car lot. They did give a good idea of what this area was like for the last century or so.

Next door to my house, on the south side is a big factory type building that belongs to Enerzone, which manufactures industrial furnaces of some sort. Previously this building had been various different businesses, including a plastics manufacturer and a fruit and vegetable terminal. 22 Pegler had been a bakery for many decades. It is unclear from the archival information in the Hamilton Road book whether there had been other houses between my address (36) and 22, and if as the bakery grew it bought up the the neighbouring lots. By the 1950’s it became a large commercial bakery, which also did home deliveries. Obviously whoever lived in this house did not have an issue having non-residential neighbours.

I found a photo of my house from the 1940’s posted on FB, completely by accident. I contacted the poster, who sent me a couple of other photos. His grandmother lived here as a little girl. Here’s a photo from 1941: 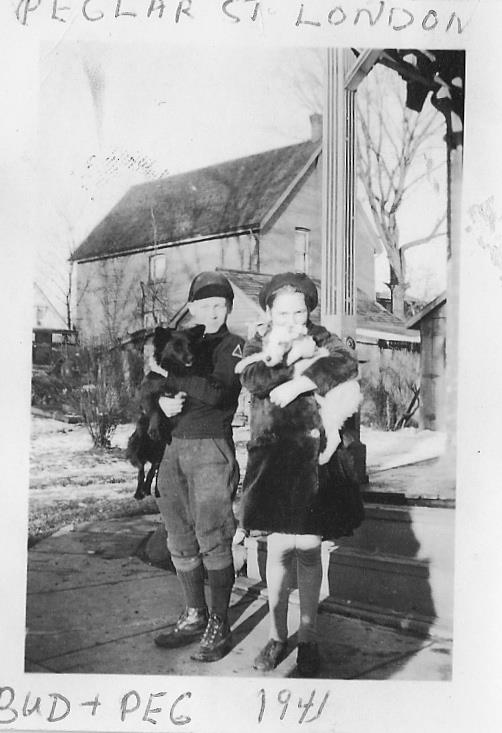 Besides the multicolored paint on the porch post, and the wooden steps, and what looks to be the lilac bush – which still survives in that spot – I was interested in what had been next door, where the used car lot was. The house in the background looks the same age as the other houses on Hamilton Road, in this area. There’s a couple of oldsters, and a few youngsters, but most of the houses were built in the late 1800’s.

The design of the gas station building next door looks very 1950’s. It had the mechanics bay on one side, then the other side had the cash register, with a curved wall with a large picture window. The washrooms were tucked discreetly behind this. There were two pumps in the front, with no canopy. It was similar to this:

The outside of the building was covered in a new fangled building material. It was  porcelain enamel on sheets of steel. This was sold under many manufacturers names, including Lustron. Gardner Galleries on Hamilton and Rectory St. is the only surviving building in this area with a porcelain enamel exterior that I am aware of.

I watched as the crew next door tore off the white squares of this Lustron type material on the gas station building. A few landed in my yard and I kept them. This was definitely what it was. There were no signs of rust or other damage, except for how ruthlessly they were removed. For a building material exposed to the elements for 70 years this stuff was amazing. It was identical to the exterior of my 1950’s stove.

What was this replaced with ? Styrofoam with a thin layer of stucco.

I hated watching this destruction. It wasn’t MY building, the building had no heritage designation, and most people would consider gas station architecture to be worthless.

Where did these panels go ? In the dumpster.