It took awhile to feel confident on the scaffolding. It felt sturdy, but due to the projection of the corbels and whatnot, there was an 18″ gap between the scaffolding and the house. Even with the safety crossbars I worried that I would make an oblivious turn and step, tumble and fall off the edge.

Most of the wood detail on the front of the second story was sound, which was a major relief. A few areas were dried out or fragile, but nothing was mushy or hollow. I started scraping with a putty knife, then moved on to a heat gun for the areas that were large enough. The edges of the wood are the most vulnerable to igniting, so I brought a spray bottle of water with me, to wet any areas that seemed to smoulder. 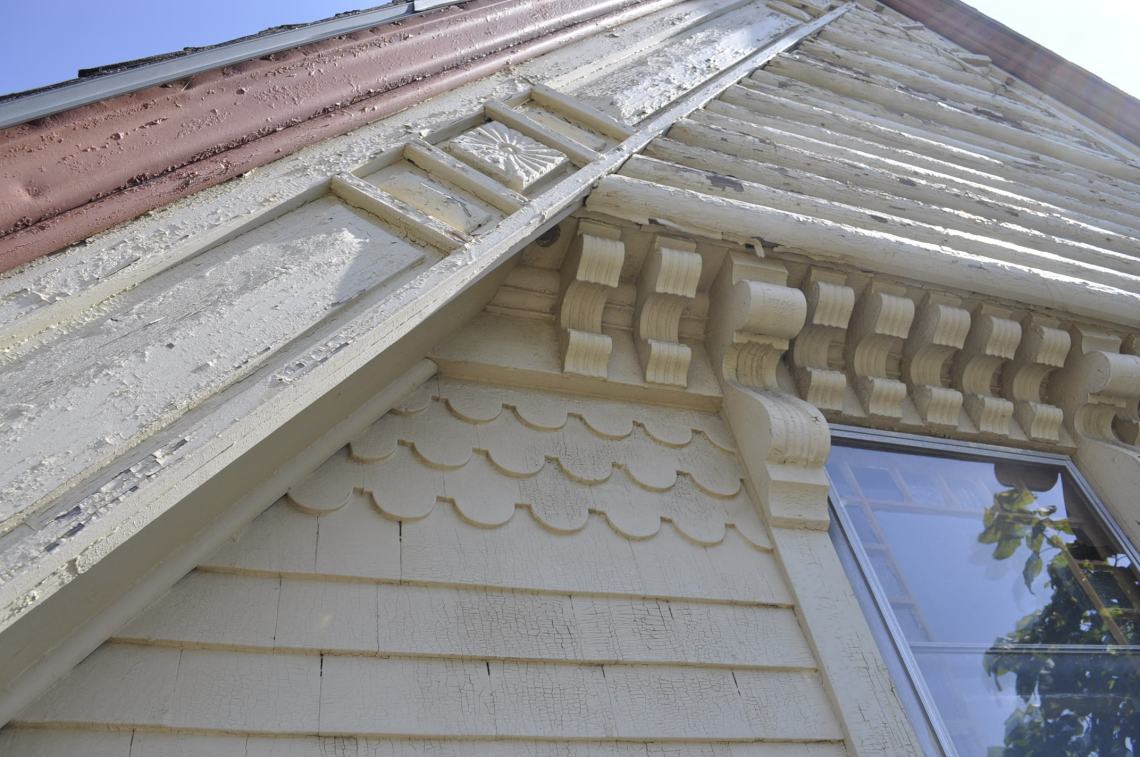 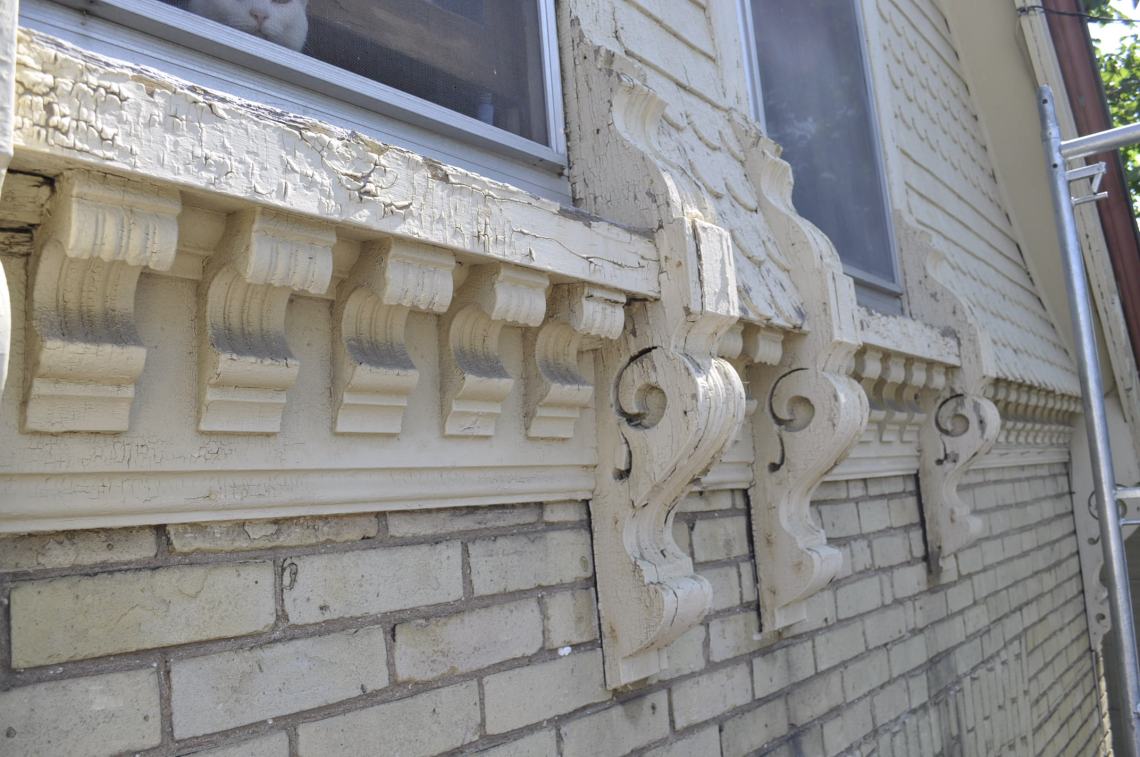 Work on the scaffold was further complicated by my aversion to the sun. As a pale redhead I burn. Migraines are easily induced by a glare in my eyes. I worked for a few hours here and there in the morning into the afternoon, before the sun moved to direct exposure, and after supper.

I discovered that some of the decorative shingles had an embossed pattern, of what appeared to be a flower in a vase. I had never seen this detail before, or noticed it on other local houses. This must have looked extra fancy when the house was brand new – another decorative detail on an exterior loaded with them. I wondered about who built this house – and why there was such an intense amount of exterior detail ? 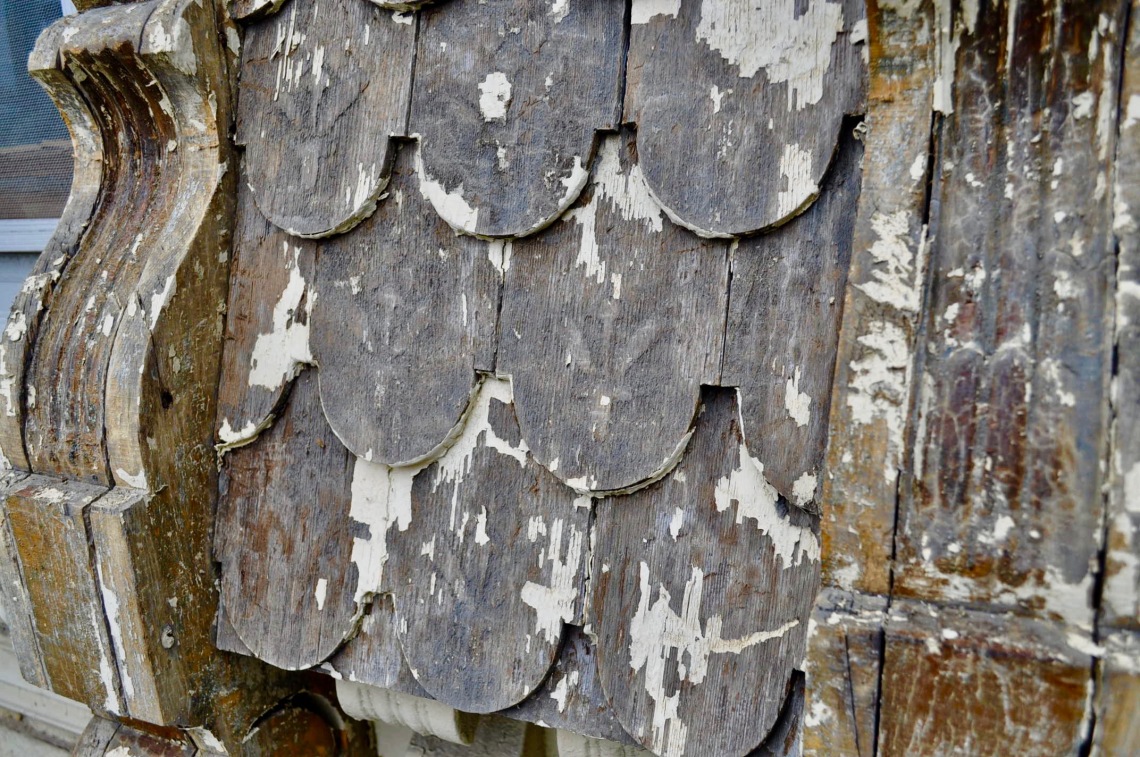 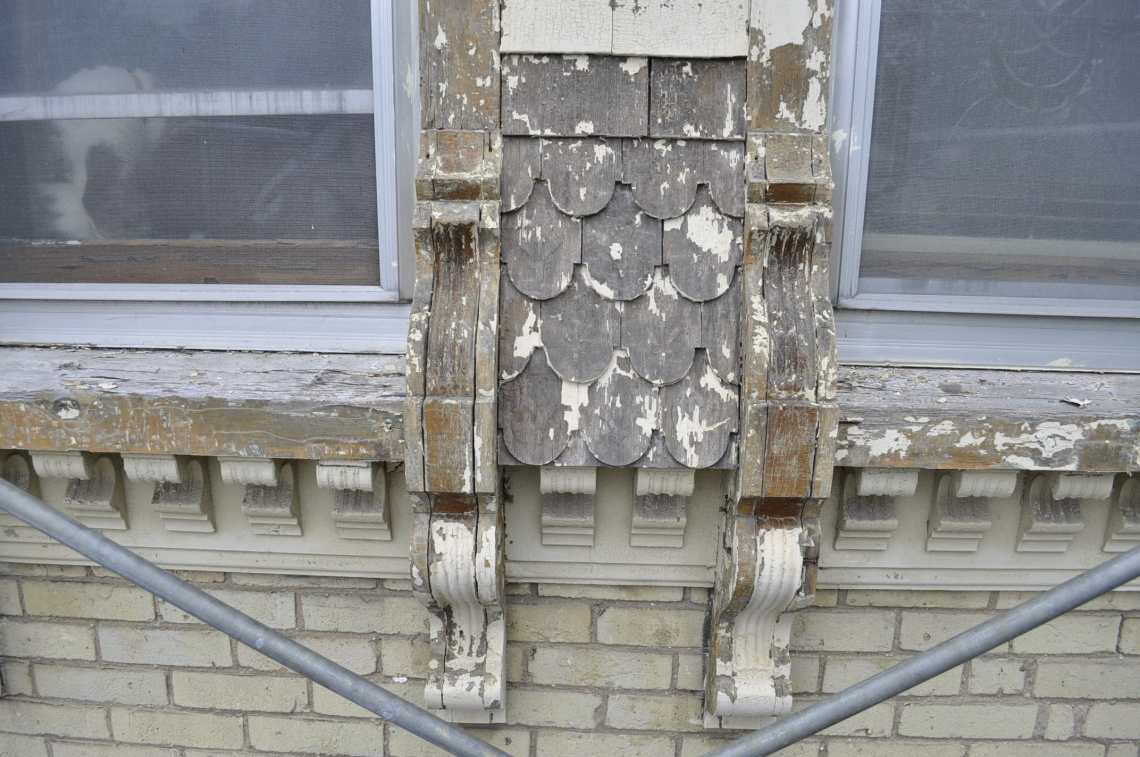 The areas that had been under an overhang had paint that was still very sound. I was quite surprised that it was holding up so well. I didn’t know when the house had been last painted – definitely not by the previous owner (c. 2005 – 2016) – and possibly not by the previous- previous owner (1974 – 2005). For all the issues with toxicity, those oil based alkyd paints really performed well. 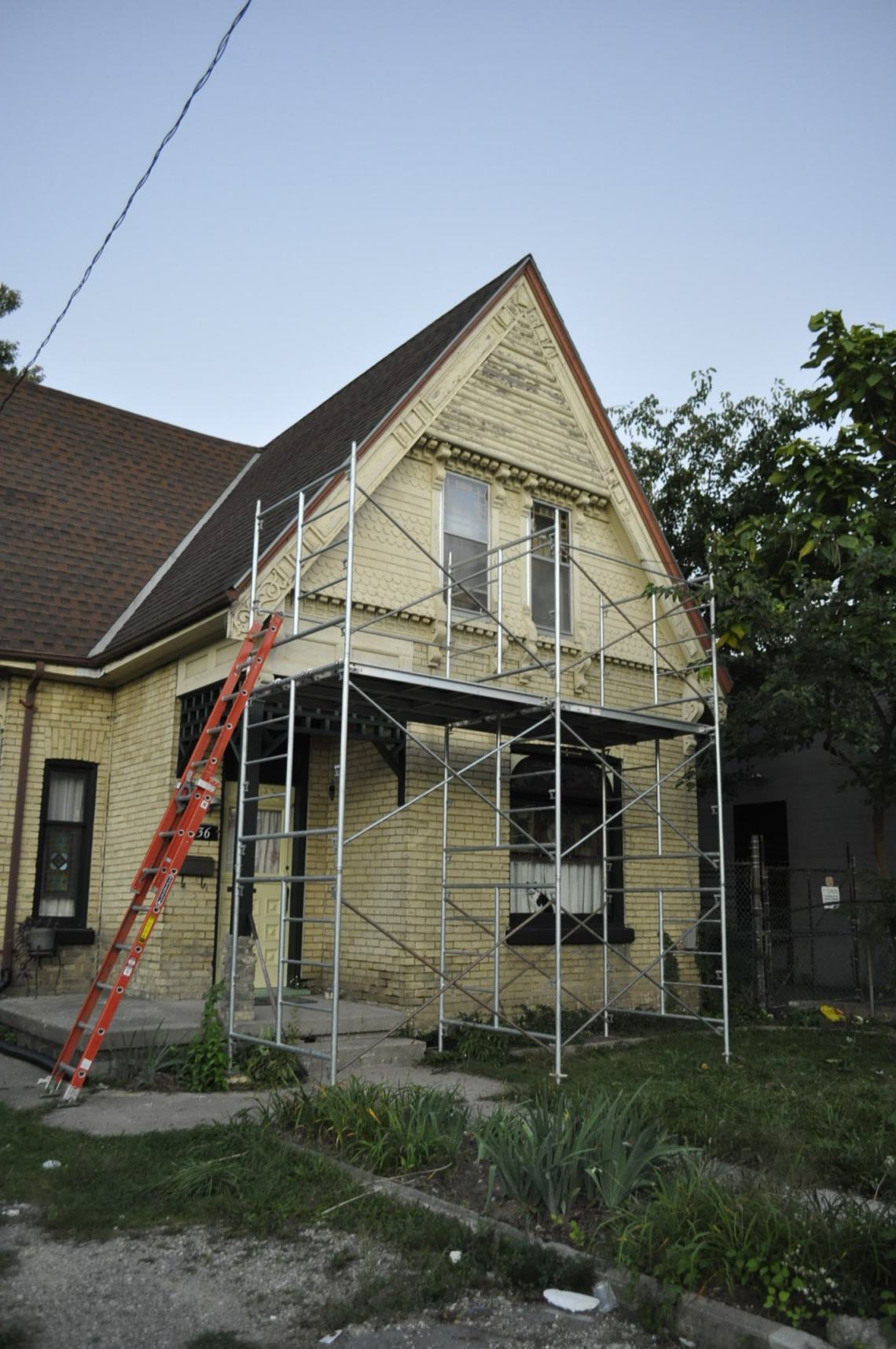 I scraped as much as I could reach. John was back up north, so I was waiting on his return for the rest of the scaffolding. More of it went up late in October, but it was a wet and cold fall, so my scraping ended there. In theory I had thought that it would take me (working alone) three weeks or so to get the front scraped and primed, then painted. This might be true – weather permitting – but other variables like waiting on scaffolding slowed this down. The storm windows needed to be removed, and the putty repaired, but  this also meant that the scaffolding would need to get raised a level to reach properly.

I ruminated about whether it was better to prime all the areas I scraped, or to just leave those areas bare until next spring, when I could resume, and work in a continuous fashion upwards. I did know that primer should be painted fairly soon after application – otherwise it accumulates surface dirt, which will impair the paint adhesion. I worried about whether the exposed wood areas would be more damaged, or if a winter of exposure would mean little ? (You can see the weather won, by where the scraping stopped.) 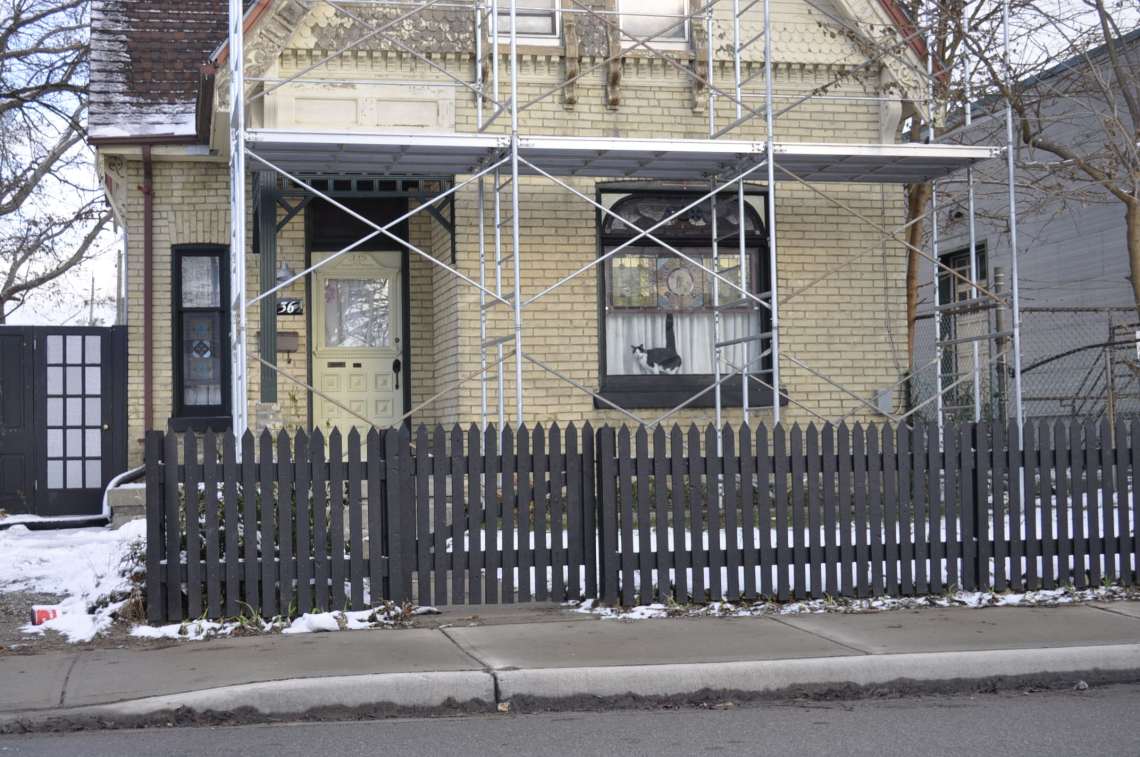 One night I slept really badly, and kept waking up from vivid nightmares. One of the nightmares was that a man had broken into my house, and was standing over my bed, reaching up to take something off the wall. I woke up from this just before 7:00 a.m., spooked and got out of bed. One of my cats had knocked a box of screws off the  worktable downstairs, and they were spread out over the floor. I looked out the window in my front door – like I do every morning – as if my missing cat might be waiting there – and I could see that the ladder was laying in the driveway. It had been firmly attached to the scaffolding, so it wasn’t like it just blew over !

I went out in my pyjamas and moved it to the backyard, and felt deeply unsettled. Did the sound of the screws hitting the floor spook the thief and they abandoned it ?

I knew that creeps will suss out a place, particularly any place that was having work done, to assess how many tools might be on site to steal, security (if any), etc. Anyone walking by would have seen me using basic hand tools, and basic corded tools. I was more concerned that they planned to steal the scaffolding components and the ladder.

Was it a lazy opportunist planning to pawn or a creepy contractor stealing what he needed ? Both scenarios made me uncomfortable. EOA.