I contacted the city before getting the posts set for the fence in the front yard. London is weird in that there are very few fenced front yards. Those that do have fences in the front often have them set back at a strange distance from the sidewalk, 5 or 6 or more feet back. This I understand is because while your property is measured at Y x Y feet, that the city owns a certain portion of the land adjacent to the street. – even though it seems like YOU own it

This makes very little sense to me, as the city does not mow the lawn, provide plants or attend to any of the things that a reasonable property owner is expected to do. The documents attached to my property specify the dimensions and make no note of the city owned areas. I suppose this applies when a city wants to widen a road, or do infrastructure work, as the city utilities are typically in this area – but how often does a city do this ?

The posthole company had locates done, and where they would have probably set the posts – in that odd location halfway in my yard – was complicated by the location of the gas lines. They could not dig within a meter of the gas line. Thus, the posts were set closER to the sidewalk.

What the city said to me, in a phone call and in an email, implied that as long as my fence did not violate the height guideline – no taller than three feet tall – and IF the city needed to access my property that I would agree to the fence being taken down, there should be no problem. Now that the fence is mostly built, I am waiting for that other shoe to drop.

No person shall have, erect, construct, maintain or permit to be erected, constructed or maintained a fence from the lot line abutting a street to the sidewalk and along the same on the property of the City unless:

a) such fence conforms to the height requirements as prescribed herein: and,

This was the reply I received from the city regarding this matter (city employee’s name withheld):

Thank you for your inquiry.

As per the City of London Fence By-law PS-6;

For more information regarding the above, please see the below link to the City of London Fence By-law.

If you have any questions regarding the above, please contact me and I will do my best to answer them or refer you to another staff member.

Is my fence a violation of this bylaw ? Even I don’t know.

I am prepared to argue that due to the social issues in this area, that on numerous occasions unknown strangers have been personally observed:

therefore a short fence would at least create a psychological barrier. Would they open the gate to do these things ? I need to add that the business next door inexplicably, regularly leaves boxes of its trash beside their dumpster, which blows into my yard and is never reclaimed. Would they toss it over a fence instead ? It would be easier to put it in the dumpster I’ll bet.

” 4.11 Animal – running at large. No person shall permit any animal to run at large”

“4.12 Tresspassing – by animal. No person shall permit any animal to trespass on any property.”

Any cat except for a disabled one can easily jump over a three foot fence. However, several of my senior cats are too lazy to do so. A front fence would assist me to comply with the animal control bylaws.

The city does allow people to trap animals that are “trespassing” in their yard and take said animal to the city pound, EVEN IF THEY KNOW THAT ANIMAL IS THEIR NEIGHBOUR’S PET ! (There are no laws that prohibit a trapped pet to be dumped elsewhere – like far in the country or by a busy highway for example. Nothing legally compels an animal trapper to only bring that animal to a shelter or be charged with cruelty and/or theft). If your pet has been taken to the city shelter, and you want to get your animal back, you will charged a certain dollar amount per day that your pet is in the shelter system, or you cannot get it back. Obviously microchipping is an excellent idea.

This law is all kinds of messed up. More front fences = less roaming pets. It should be an offence to trap another person’s pet, as in the eyes of the law a pet is considered property. Trapping a pet = theft. (Obviously this shouldn’t apply in situations where an animal is neglected, abandoned, ill or injured or appears this way.)

Anyhow, I wanted to make a picket fence in my front yard.

Did you know that pre-cut wood fence pickets are no longer available in Canada, at least at the many places I looked ? Home Hardware’s Building Center had just discontinued them. I did not want a white vinyl picket fence, the only other alternative.

I did want the picket fence badly enough that John was willing to cut boards to length, then individually cut each picket. I didn’t want pressure treated lumber – it just looks awful to me. It is also so wet from the chemical infusion that you have to wait for almost a year to paint it.

We did all the pickets assembly line style. I made a template and marked the boards, John cut, and I moved the uncut and cut boards. As per my calculations – done twice – I would need 256 pickets.

I love the really old picket fences – where the pickets had fancy shapes or decorative notches. I wasn’t prepared to have my life taken over with a scroll saw, to do this myself, so I made peace with the notion of having a plain picket fence.

I watched some fence building videos, and the consensus was that it was more sensible to paint all the pickets first, before the fence was assembled.

This is what some but not all of the pickets looked like once they were cut. The wood was damp from outside storage at the lumberyard, so I propped them against any available surface to dry out

Then came my summer of black paint. I used oil paint from the hardware store, diluted with Penetrol. Penetrol helps the paint to sink into the fibers of the wood. I painted as many pickets as I could lay out to dry. I did this over and over all summer, two coats each side, including the bottoms:

When John was available again in the fall, he cut and installed the (prepainted, 2 coats on all sides) rails, then I started attaching pickets. I sat on a milk crate with my drill (corded).

I discovered that a paint stir stick was 1″ wide – the spacing I had calculated – so I used that. Since my property was on a slight incline, the position of the screw holes moved around some. I had never assembled a picket fence before. It wasn’t hard – but was slightly tricky. I needed to fudge the spacing somewhat to make the pickets all fit with no major and no minor gaps.

John had things going on in his personal life including a major move, so the gate for the driveway didn’t get made before the first snow. Despite this, I was pleased with the progress that had been made: 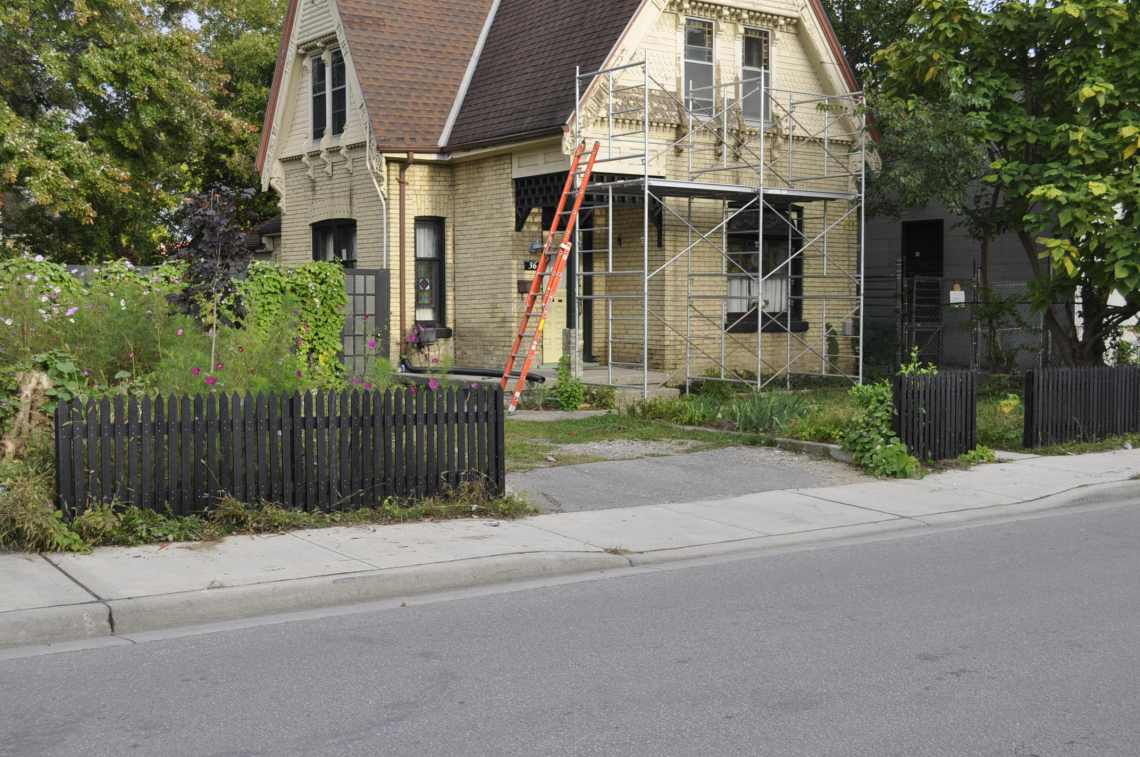